In his earlier works, Amir Fattal consistently developed a language of objects, based on a minimalist aesthetic, that employed neo-industrial strategies of repetition, compression, reversal, and estrangement to transcend the presiding dogma of ‘non-specificity’ by highlighting present events and attitudes in reference to historical images or narratives. Both as silent witnesses and repositories of memory, Fattal appropriated, and adapted, chosen examples of previous art, architecture, photography or music as disruptive ‘objects’ in order to create an aesthetic unease out of which patterns of behavior or archetypical responses may be extrapolated.

Fattal’s images and objects may, on first sight, seem innocent yet, when reproduced within the framework of his abiding concern with the fragility of life and culture, their associations become redolent of either barbarism or mortality; sometimes of both at the same time. In this respect he has become a protagonist of the cultivation and exposition of what could be described as memory subsumed within continuing life of objects: fragments of the past living on and transformed by the present. His Jewish-Iraqi descent (both his parents were born in Baghdad, and he is first generation Israeli), as well as his current life as an artist in Berlin, have heightened a sense of tension that runs throughout his work, balancing delicately between the necessities for atonement and reconciliation.

The triptych light box Three Shadows (2010), with its related pigment prints, took as its starting point a photograph of the shadow of a man on a ladder that had been left behind by the white heat of the atomic blast in Hiroshima; The Touch of Your Lens (2012) is comprised of three transfer drawings based on uniformly smiling photographs of young women taken during World War II by Hugo Jaeger, Adolf Hitler’s personal photographer. These depict Eva Braun, Hitler’s lover, and two anonymous women: a Polish nurse in a prison camp, and a Jewish woman in a Polish concentration camp. They all smile in a similar way, but obviously experienced radically different situations and fates. The three black sheets of used carbon paper that enabled each image to be copied stand like gravestones directly beneath each portrait. 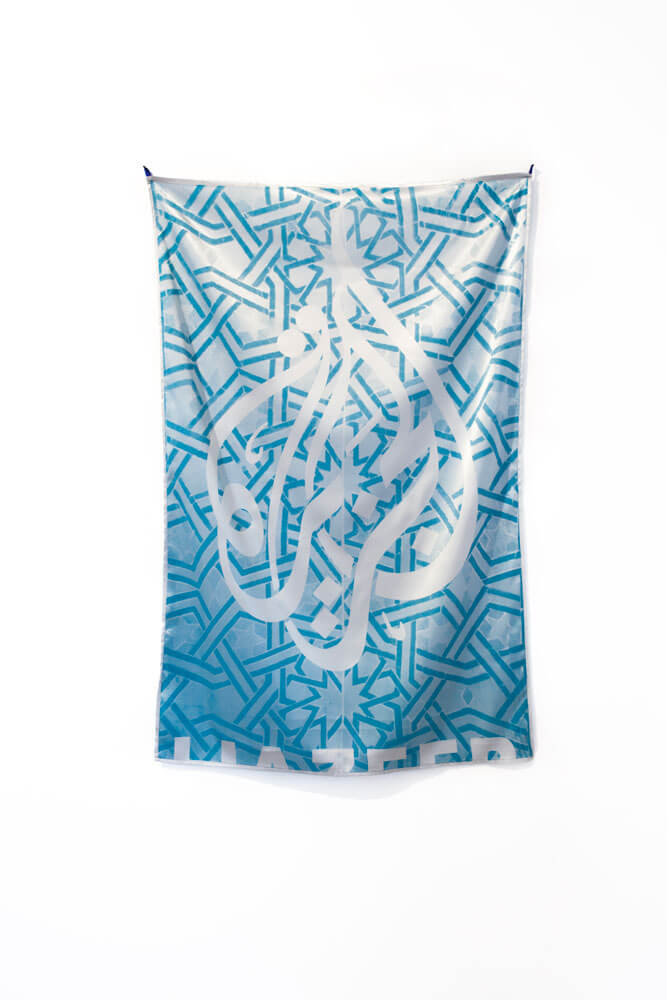 An appreciation of the ambiguous impenetrability of surface is intensified in Fattal’s works Double Mendelsohn and Double Speer (2012), in which stylised transparencies of architectural plans are placed over and coldly reflected in golden mirrors, suggest monumental stylistic likeness between German-Jewish architect Erich Mendelsohn’s 1936 design for the Weizmann House in Tel Aviv and Albert Speer’s insubstantial Cathedral of Light that was constructed out of searchlight beams for the 1936 Nazi Nuremberg Rally. The unsettling proposition that perceived opposites may be little more than different sides of the same coin had already been planted in his work Marleni (2011), made in the same way, which comprised a theatrical portrait of the Nazi film actress and director, Leni Riefenstahl overlaid with one of Marlene Dietrich, the actress and singer who left Germany at the beginning the 1930s and strongly opposed the Nazis.  These women too have similar smiles.

In his exhibition, Mesopotography, Fattal has broadened the geographical and conceptual focus of his work to include the systematic cycles of destruction of historical and religious monuments that have characterised warfare in the Middle East, Afghanistan and North Africa over the past twenty years. The propensity for iconophobia and iconoclasm (as well as for their opposite, iconolatry) has been present in the three monotheistic religions (Christianity, Islam and Judaism) since their inception and has recurred periodically throughout their histories as part of a broader ideological struggle for power. Recent manifestations of this struggle, however, particularly those perpetrated by Islamic groups, have demonstrated a strong, almost theatrical, media awareness in which destruction represents not so much a tool of ideology but, under the pretext of obliterating blasphemy, embodies the desire to eclipse both history and memory by shaming and denying them at the same time, rather in the same way that marauding soldiers violently rape the people they vanquish. 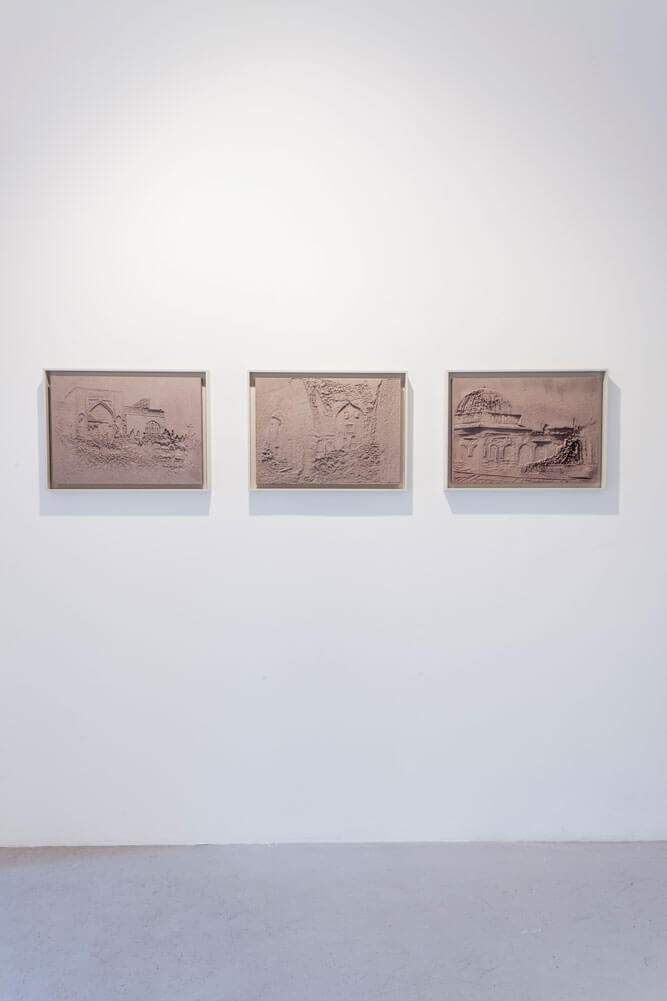 In these works, the rape of memory is Fattal’s main subject. The Babylonian Ishtar Gate (c. 575 BCE) in present-day Iraq, part of which is housed in Berlin’s Pergamon Museum, is the starting point for Terrain (2015); for this he made a laser colour scan of the cracked, pock-marked surfaces of the glazed, ornamental bricks out of which the gate was constructed and projected the resulting impression on the floor so that it appeared like a rough desert landscape seen from above as if from a bomber or a drone. A single, indistinct shadow suggested a target sight or aeroplane and the constant threat of destruction. Here objects and their memory are clearly vulnerable, an impression reinforced by Frieze (2105), a series of 3D printed reliefs that were generated digitally out of photographs, taken from the Internet, of historical buildings in varying states of dilapidation. Sculptural meditations on loss and memory, these reliefs are accompanied by storyboards that, stylistically echoing the triumphalist narratives of the friezes of ancient Assyria, Sumeria, Babylon, Greece or Rome, expose how victory is currently expressed by destruction and why these historical monuments have become ideological battlegrounds.

For Fattal, this example of nineteenth-century cultural booty safely preserved from those who would now destroy it, presents a lively paradox: this regal, heroic heraldic image could also suggest a less admirable two-facedness that the West has often shown in its transactions in this region and continues to manifest in its cultural relations.

Coverage, more than a play on words, is the title of the large fabric work with which this exhibition concludes. Decorative, geometric arabesques uniformly cover thirty-six differently coloured pieces of fabric, roughly the size of a scarf, a flag or a towel; over each of them the enlarged logo of the Qatar-based Al Jazeera Media Network is silkscreened. Shown together they create the impression of a screen of almost impenetrable tracery, or a curtain, a barrier.

With a reputation for accurate, unbiased reporting from the Middle East and worldwide, Al Jazeera is acknowledged as providing a balancing view from that of the western media. Broadcast in English, and a number of other languages, as well as Arabic, it has developed an authoritative voice. But like all powerful bodies, it is subject to criticism and, for the artist, the suspicion lingers that covering the news from whatever perspective necessarily means concealing facts or views, particularly when this relates to issues of gender and religion (the scarf) or nation (the flag). These not necessarily vexatious but complex issues have, in the pressure cooker of concealed interest and fundamentalism of all kinds, become flattened, simplified and reduced to appear as little more than faint impressions on different sides of the same worthless coin. 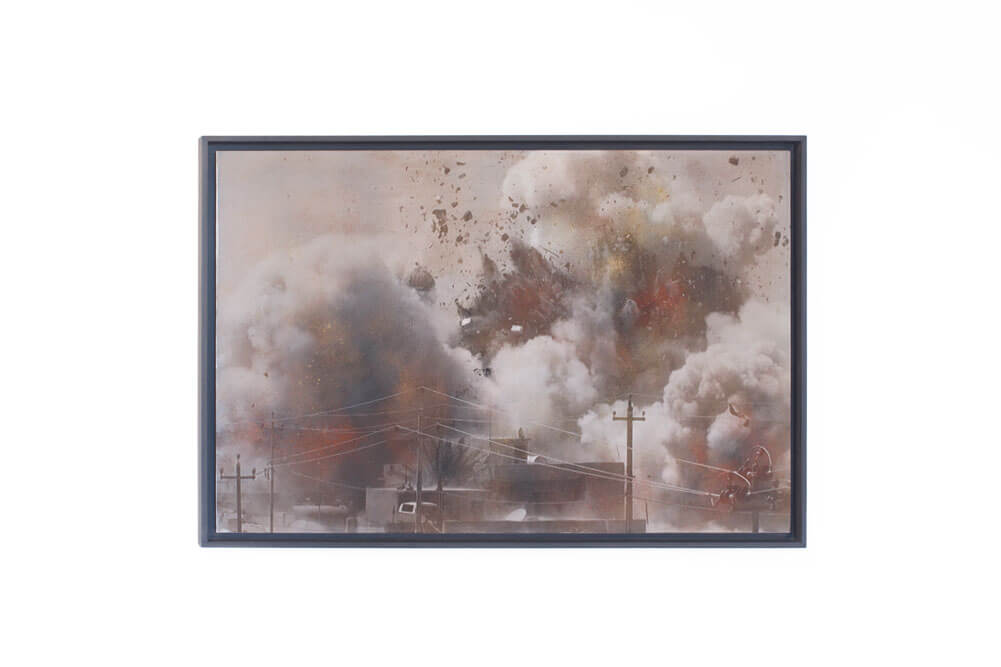 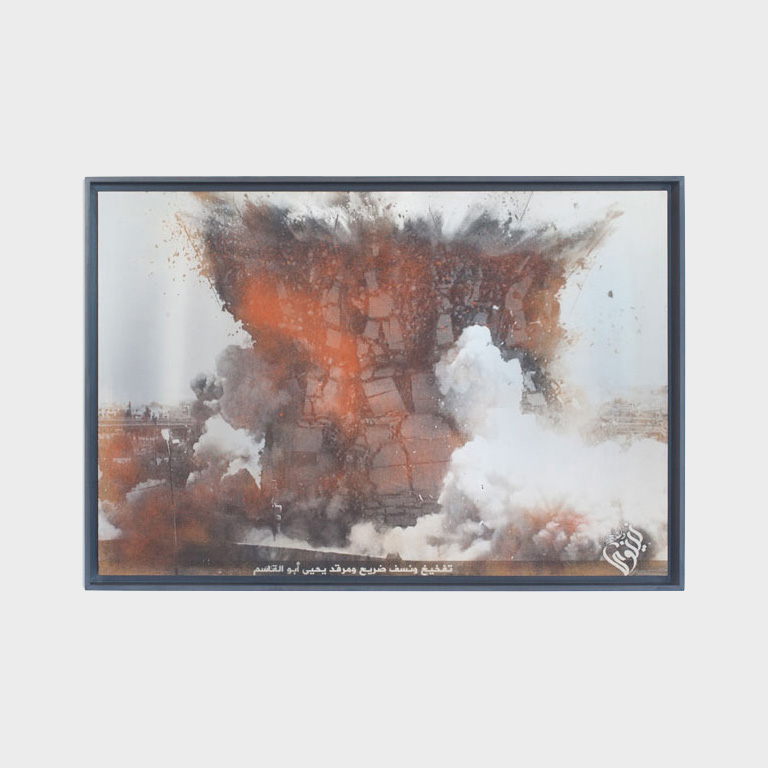 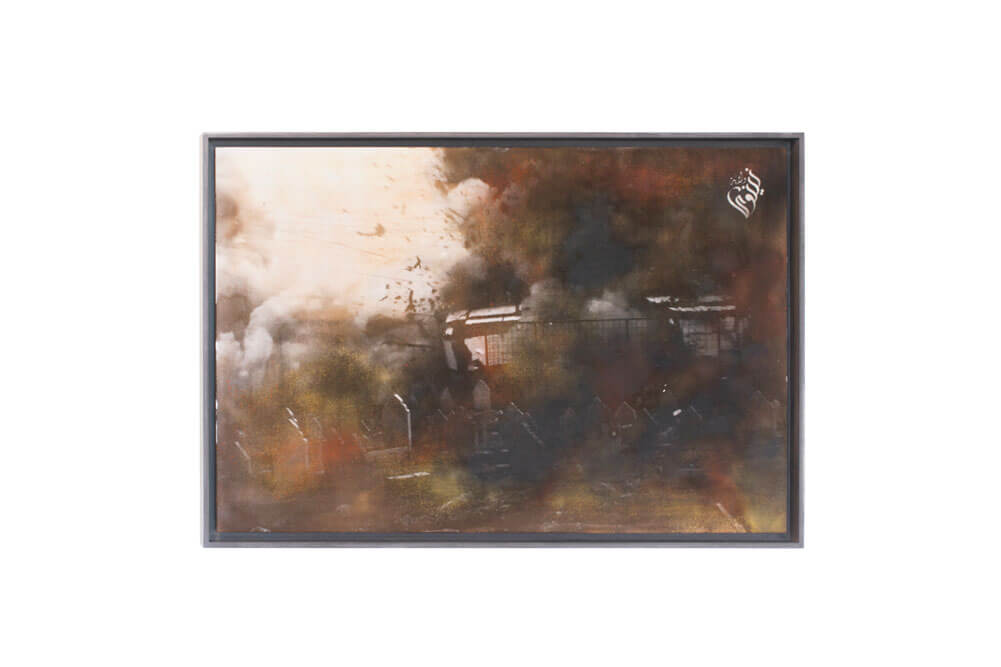 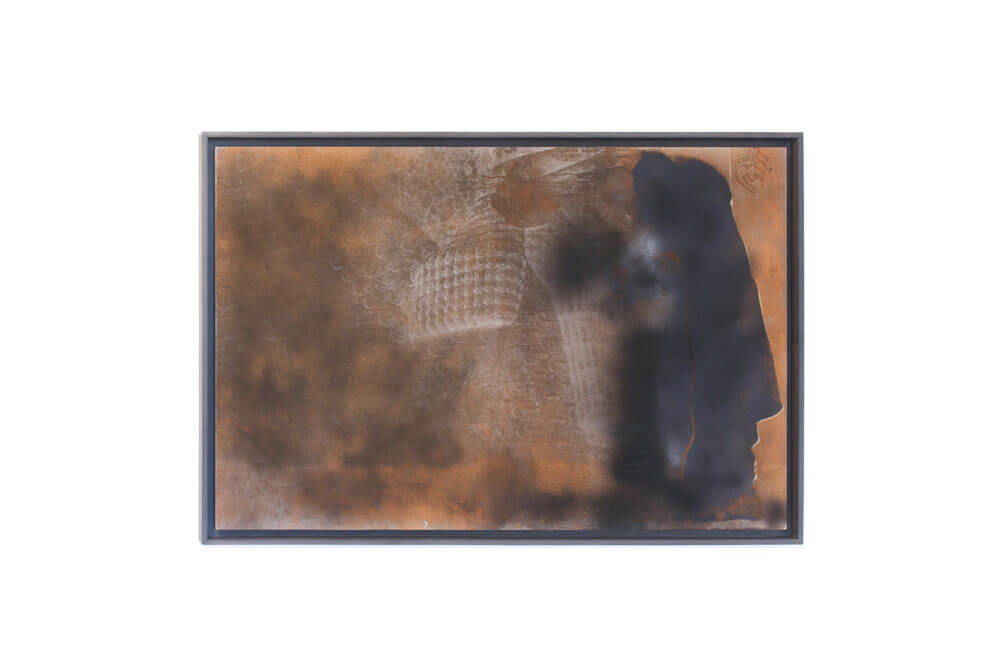 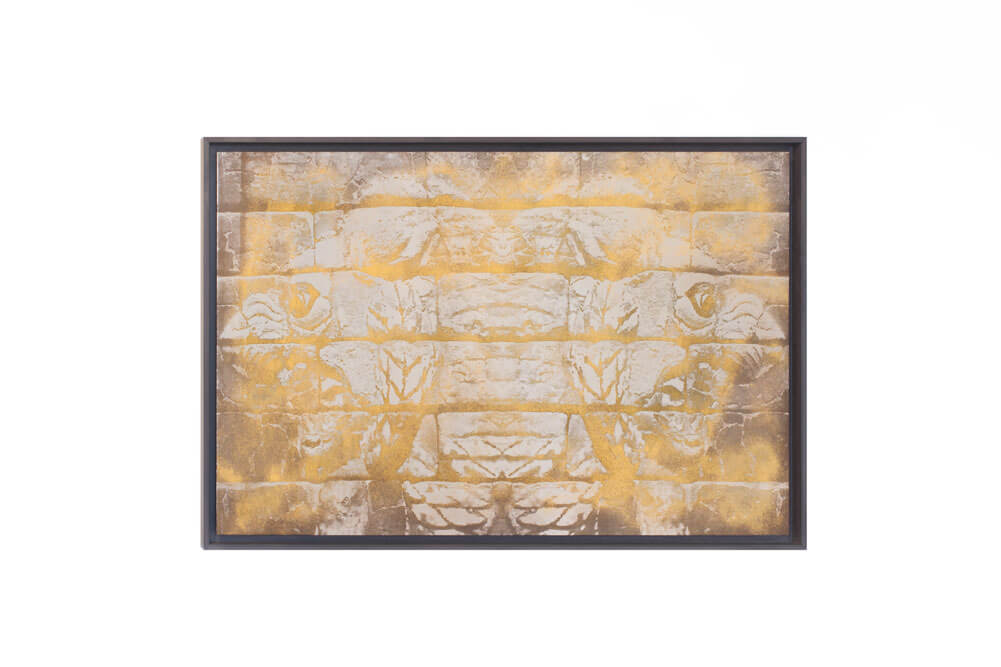 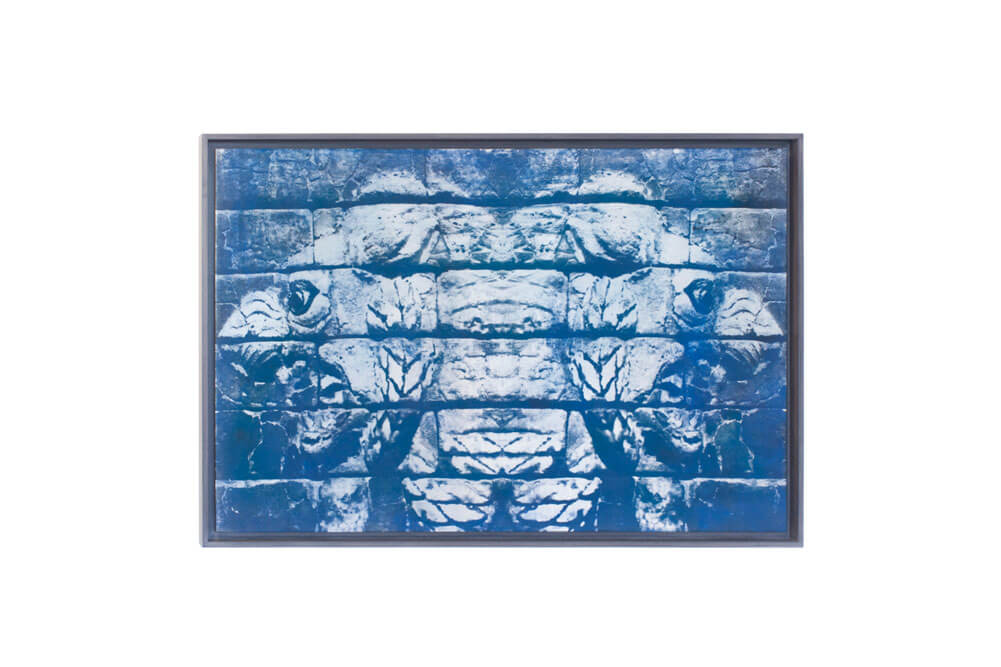 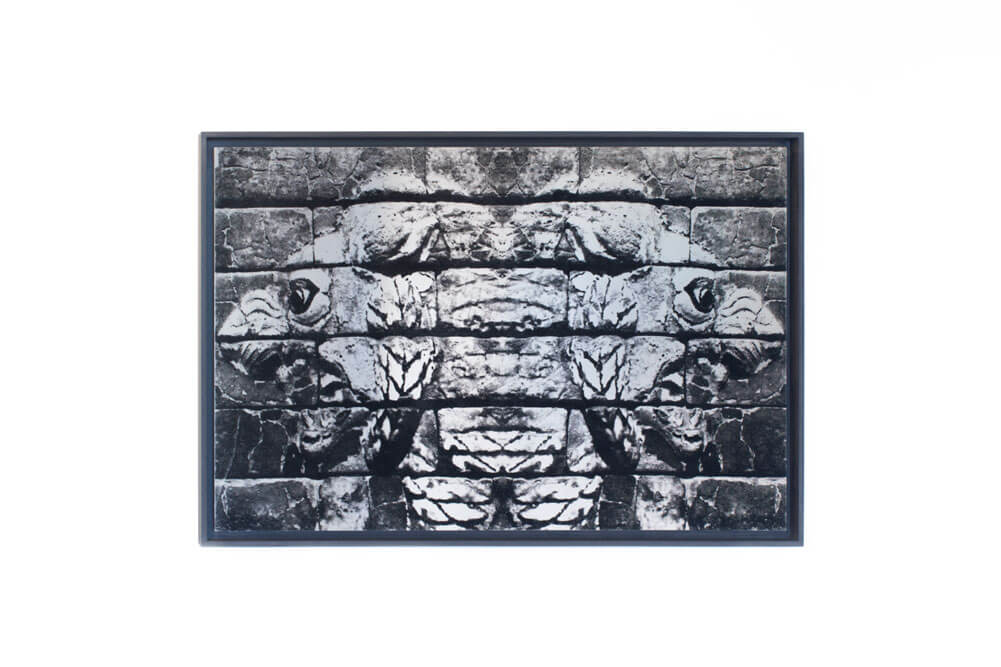 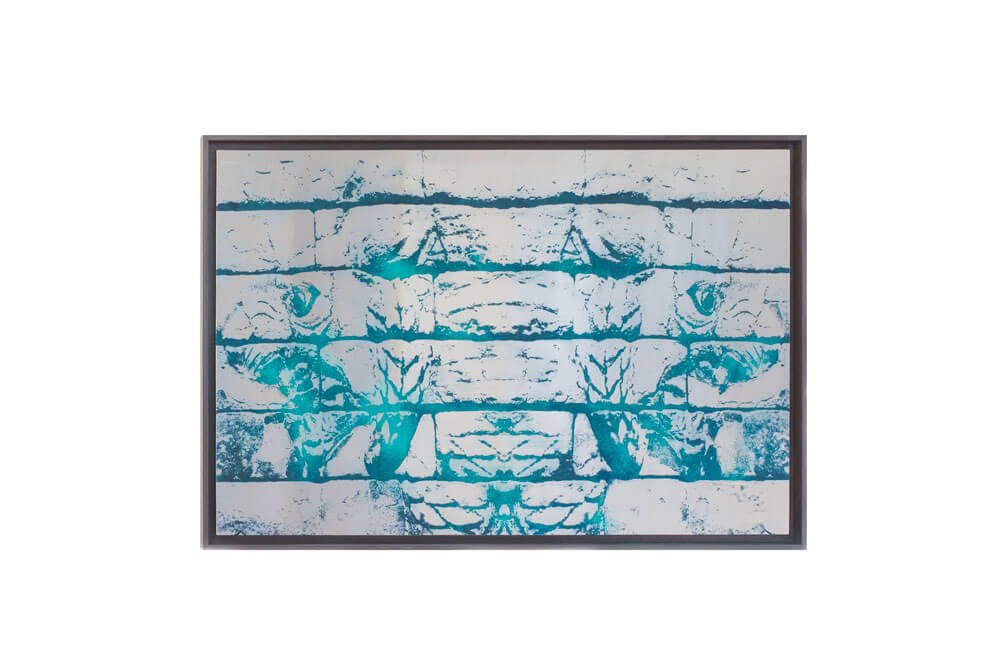 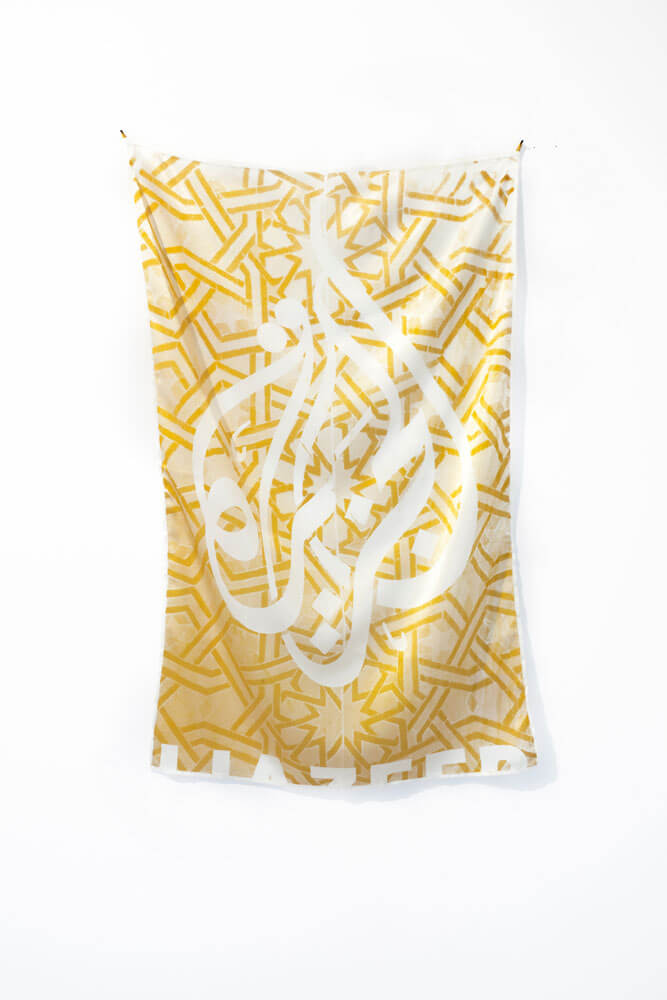 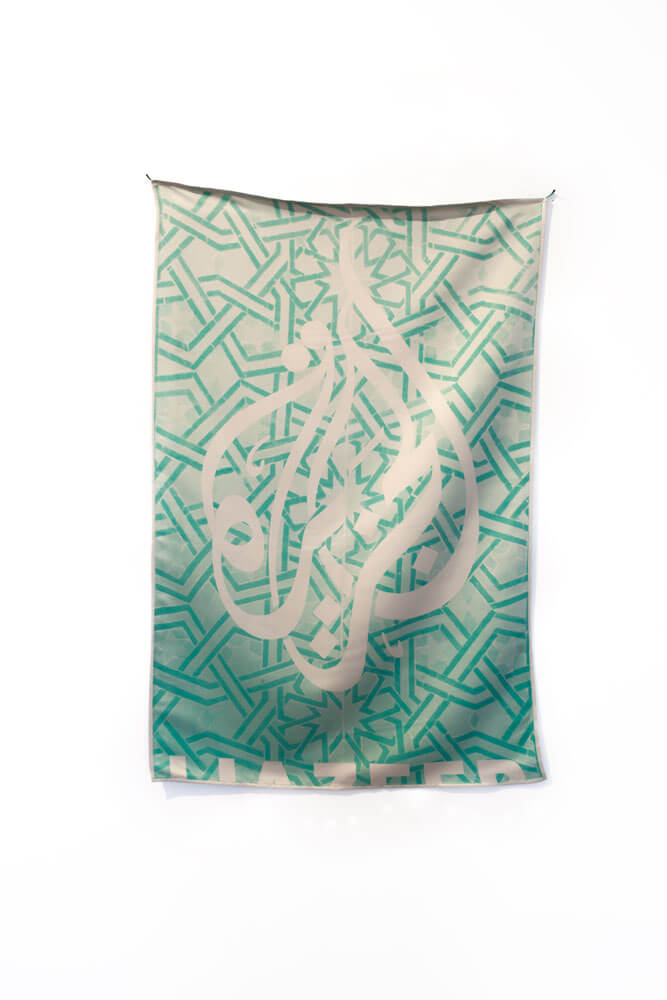 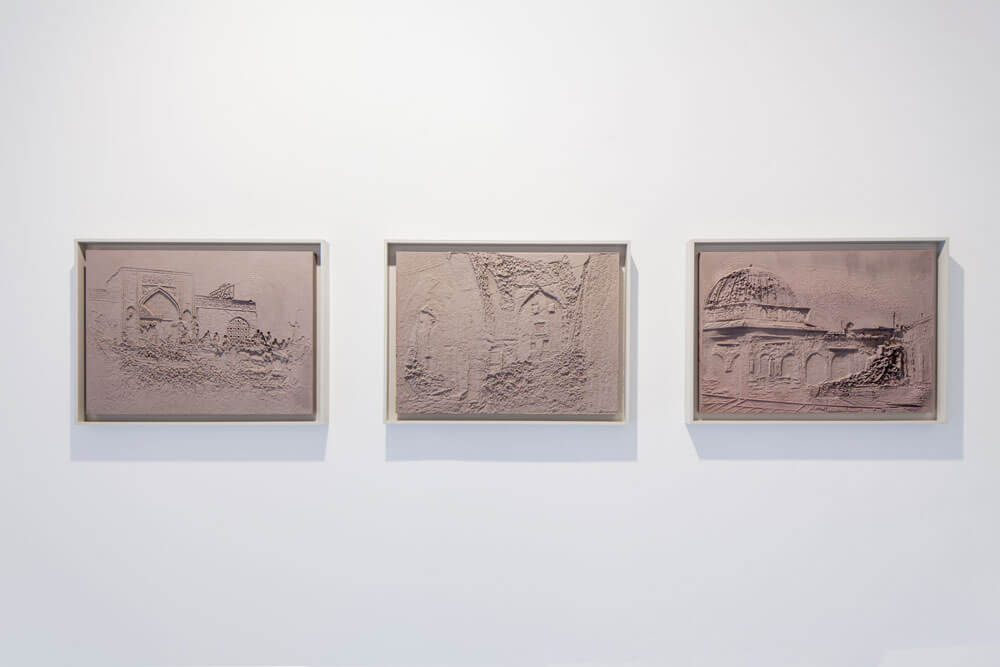 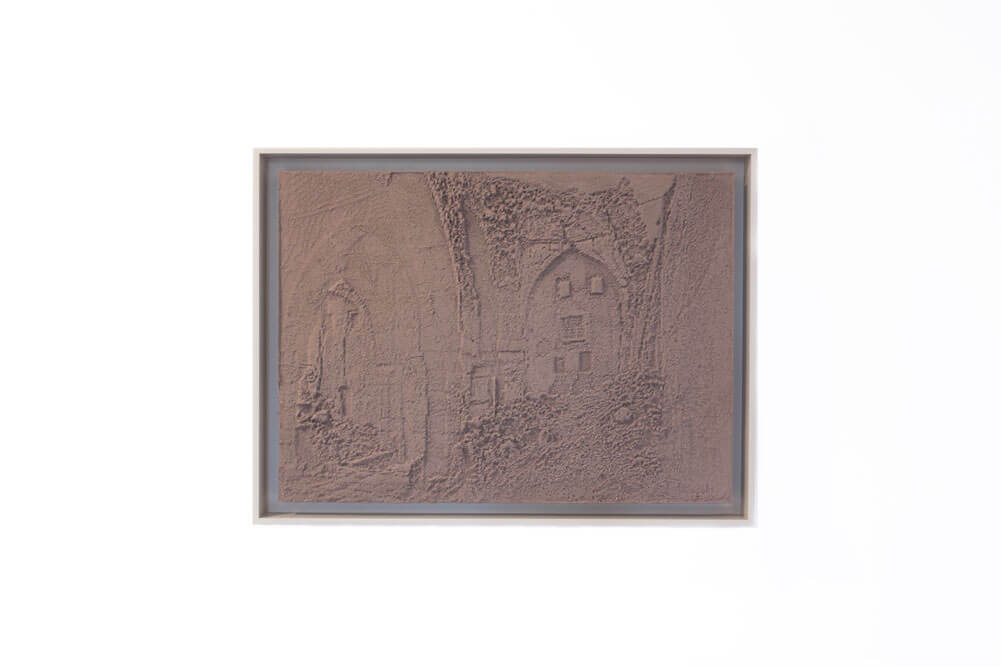 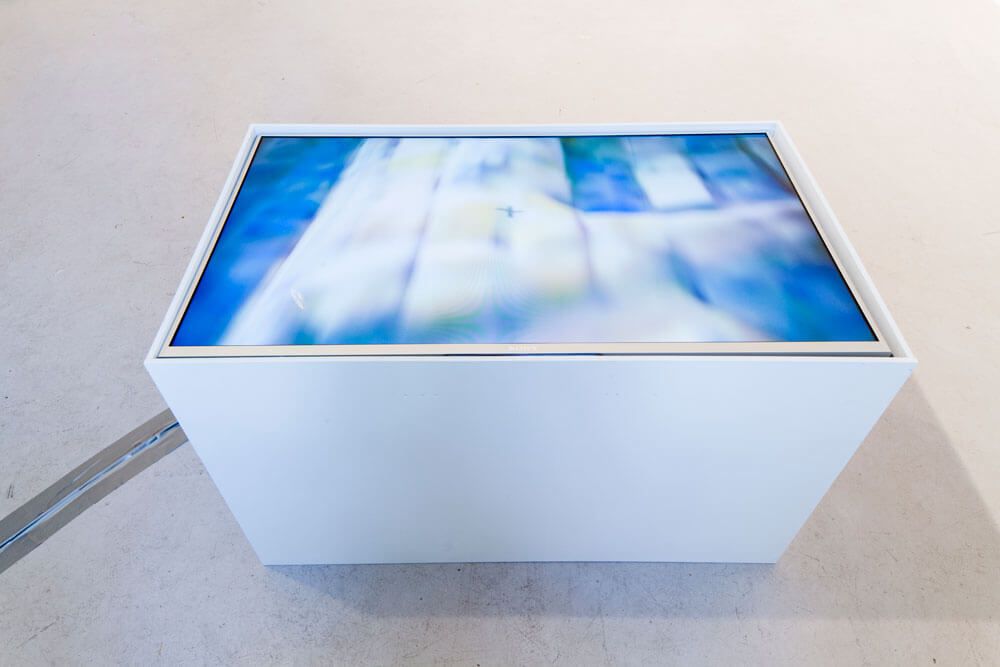 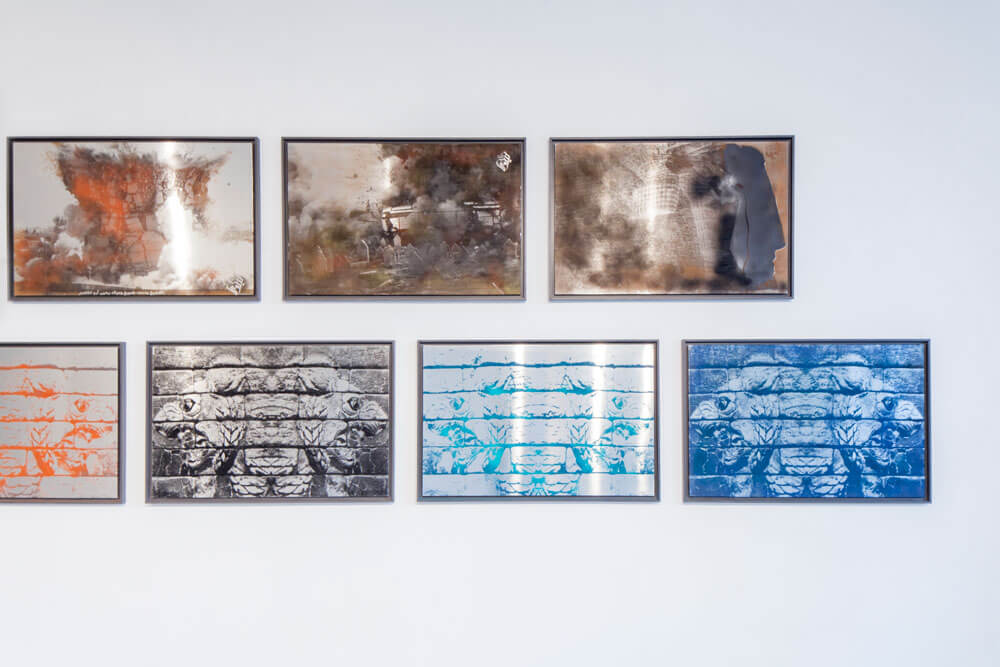 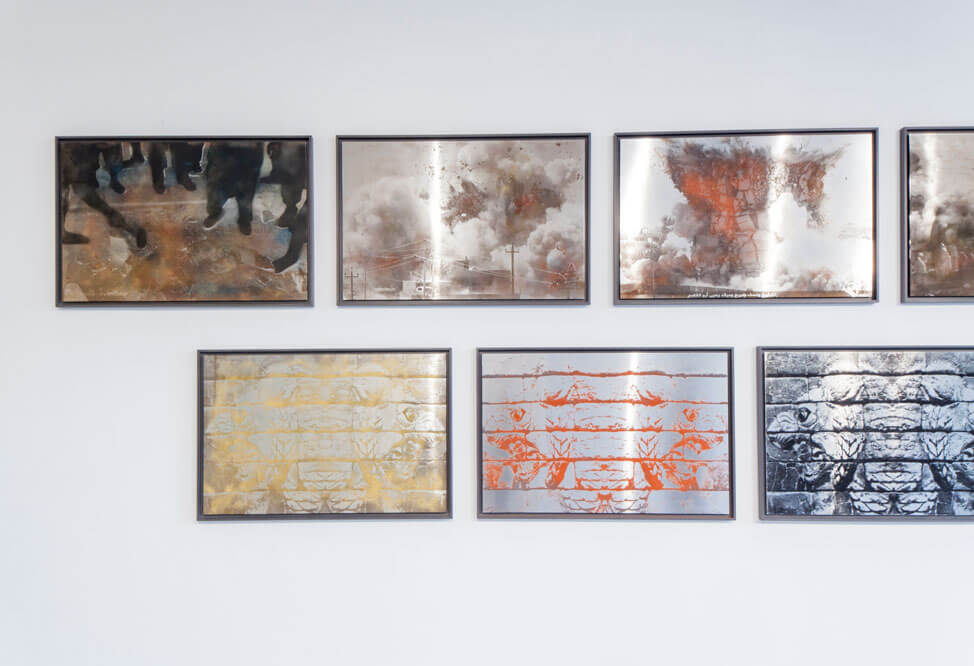 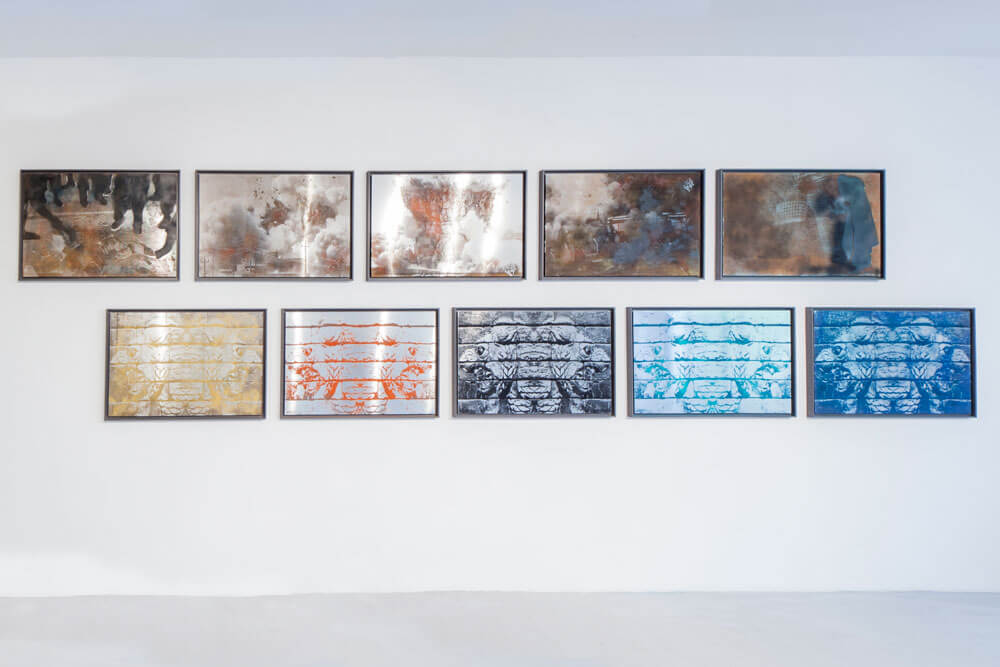 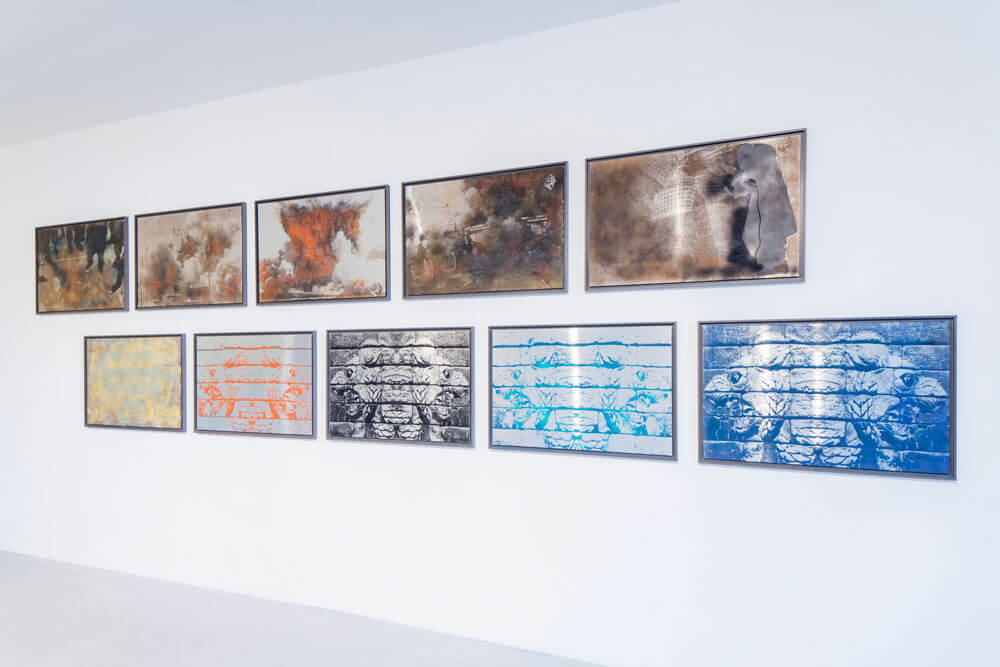 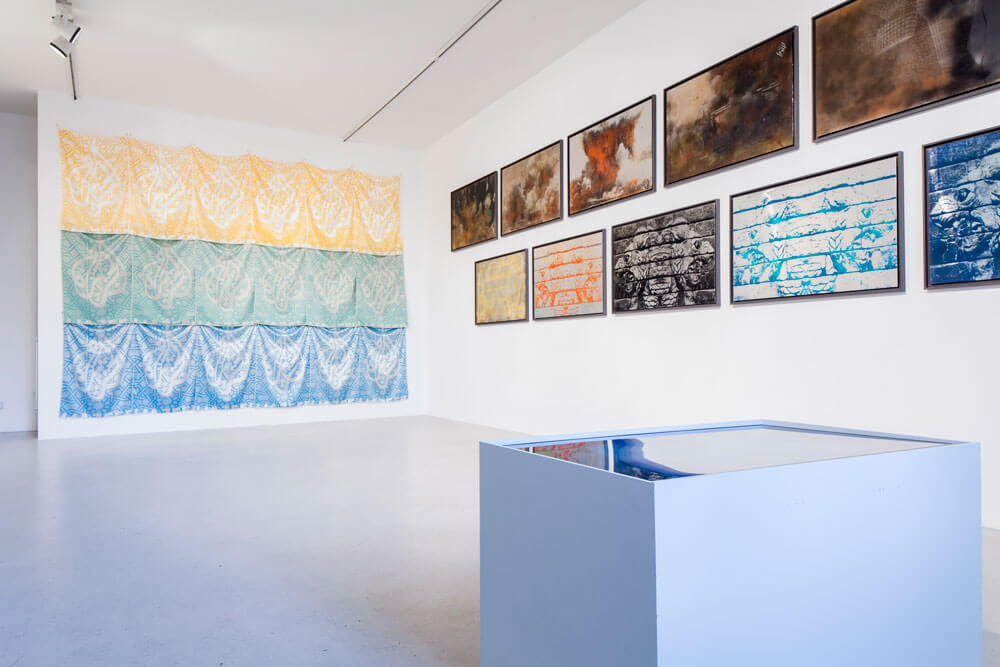 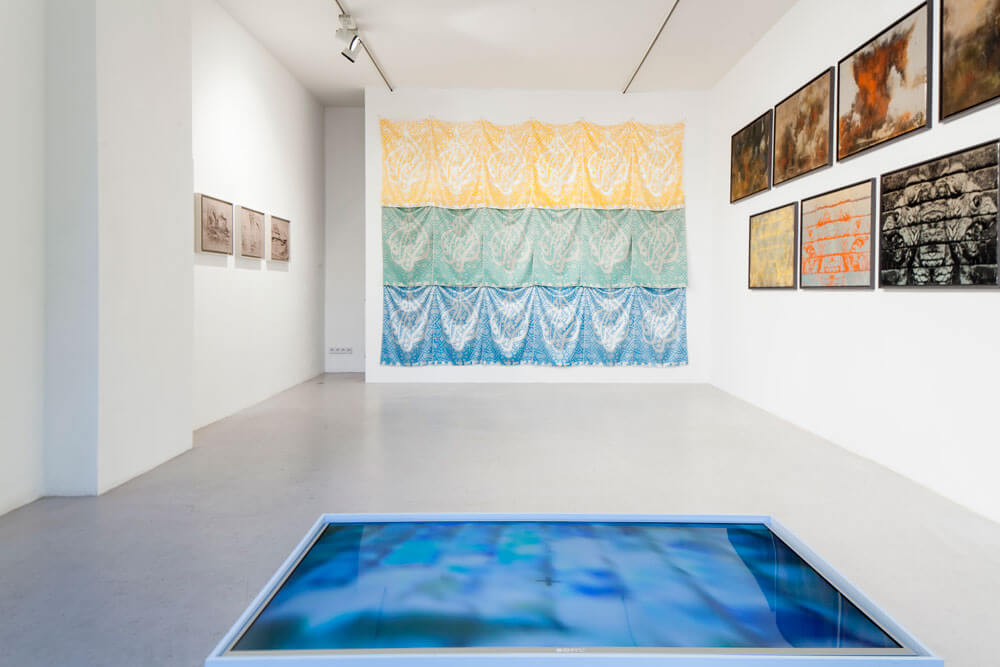 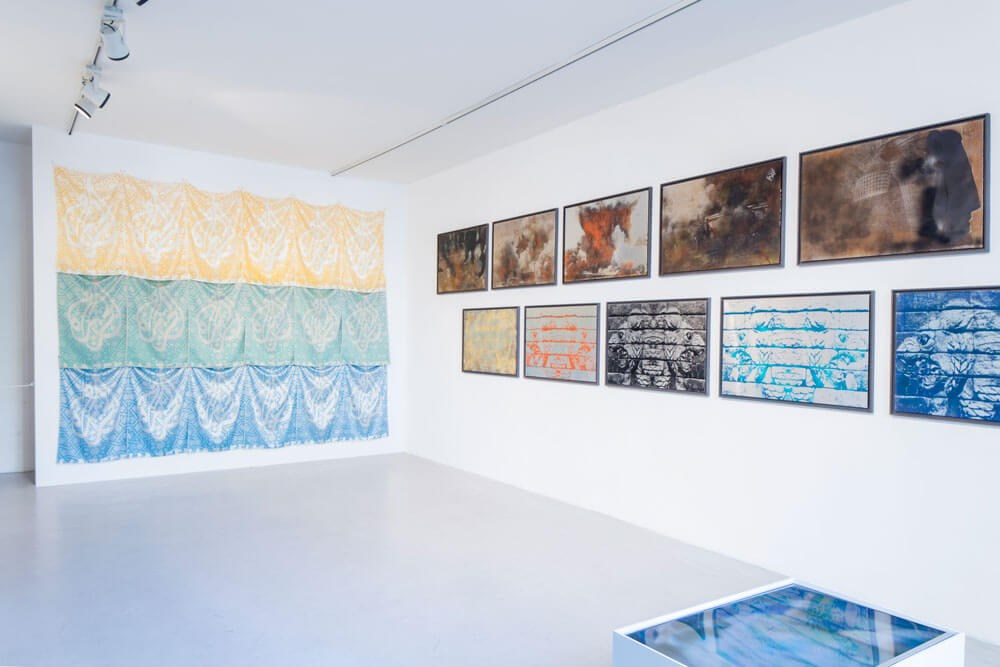 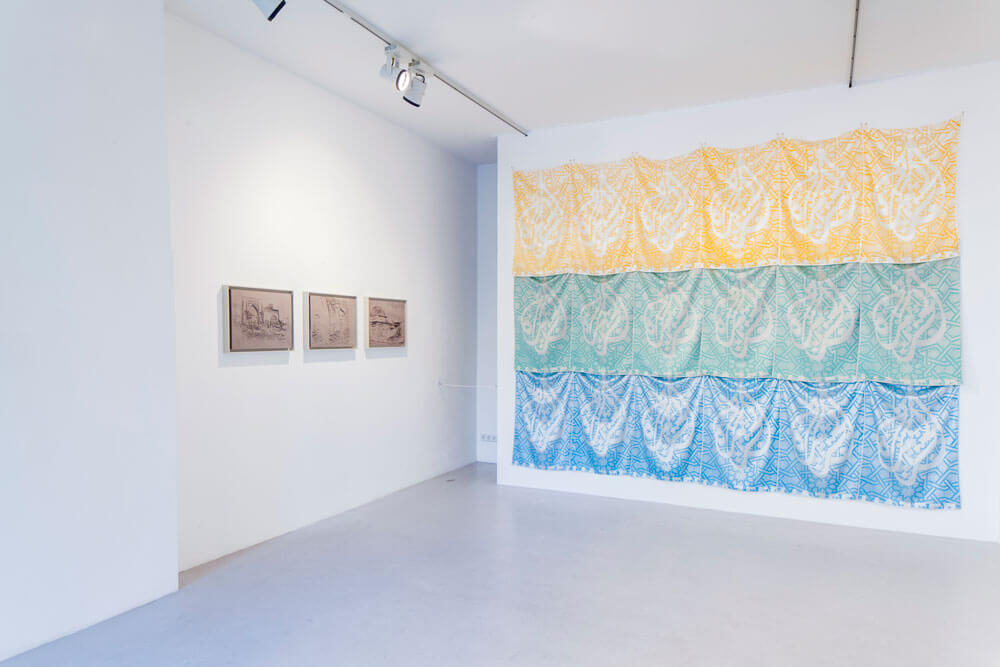 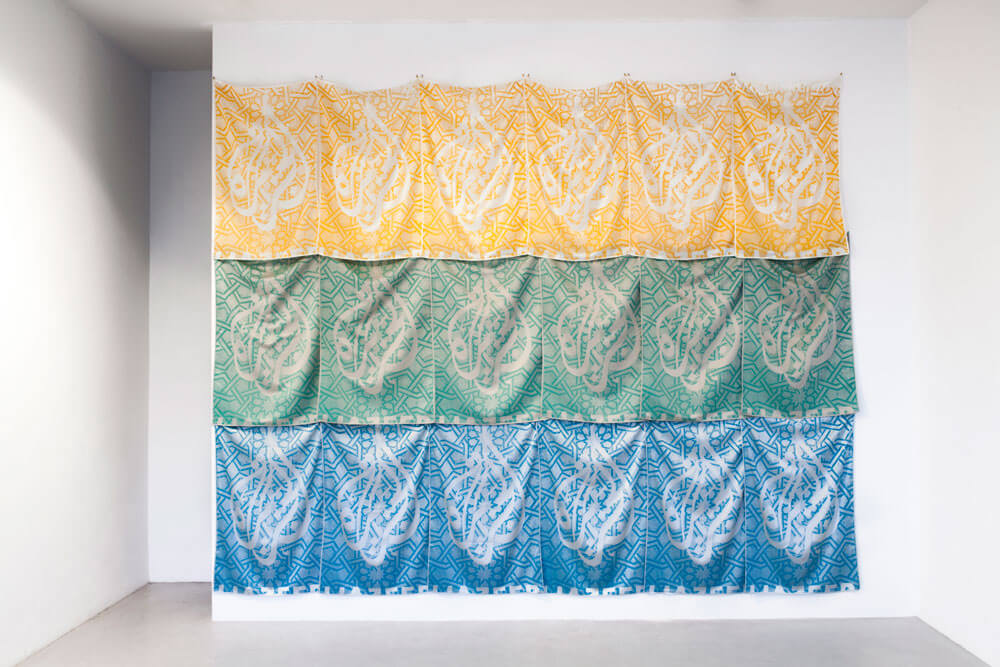 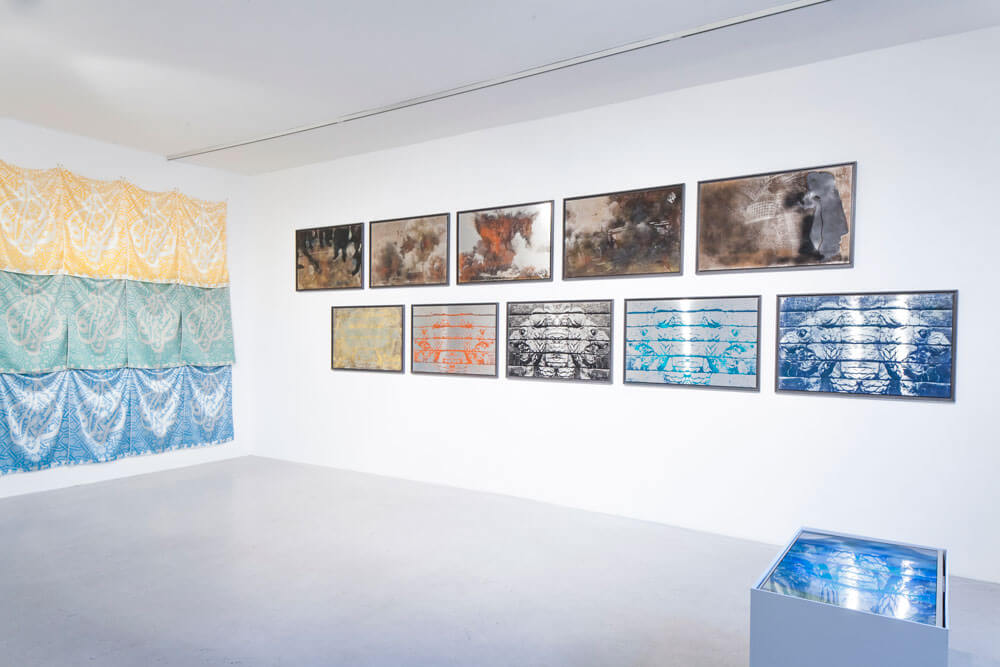